At St Peters, we aim to provide children with an experience of history which is valid, stimulating and informative.  Above all, our intent is for all children to develop the skills to become questioning and inquiring historians.  We believe these skills will be beneficial in many other subject areas and indeed as a life skill. We want to inspire the pupils' curiosity to know more about the past and to consider the fundamental historical concepts of continuity and change, cause and consequence, significance and similarities and differences within the different periods studied.

At St Peter’s we strive for each child to be able to:

History Curriculum Overview
Examples of our History learning
KS1 have been learning all about Neil Armstrong and why he is a significant person from history. He was the first man to land on the moon. He went to university and came a test pilot and flew over 200 different aircrafts! He was selected for the USA space race team. In 1969 he joined two other astronauts and went in the space craft, named Apollo 11, and went to the moon. His famous words when he first landed on the moon were "one small step for man, one giant leap for man kind".
Aleese has been busy finding out about her family history.  She brought in some fascinating information about her family tree going back 500 years.  She even found out that she had a relation, who was a witch in Pendle!!

To remember Chorley Pals in the Battle of Festubert 1915. Whole school project for Astley Hall exhibition June 2015 joining with other Primary and Secondary schools.

Together we will remember them!
Writing poems and making bears!
Writing diaries to put ourselves in their shoes
Our displays for Astley Hall
Letters home to our loved ones.
On display at Astley Hall
We attended the opening
The opening with Mayor and MP
UKS2 had the best trip ever to Fulwood Barracks and Lancashire Museum. We were taken back in time to 1916 as we joined up into the North Lancashire Regiment. We learnt drill and marching with Sergeant Powell and entered the trenches later that day! Amazing experiences as World War One was brought to life and, in turn, the sacrifice of the Chorley Pals was made real to us.
Just arrived at camp.
Learning drill.
The British Army salute
Signing up!
Inspecting our uniform
The importance of a helmet
Using our kit and the shovel
When to use a mirror
Gas attack!
Lancashire colours
Bullet damage
The Victoria Cross for bravery
Marching to the coach!
Going to the trenches
Kitted out and ready for action
Learning about trench life
Gun skills
Attention!
At ease!
On guard!
Bayonets fixed!
On guard! 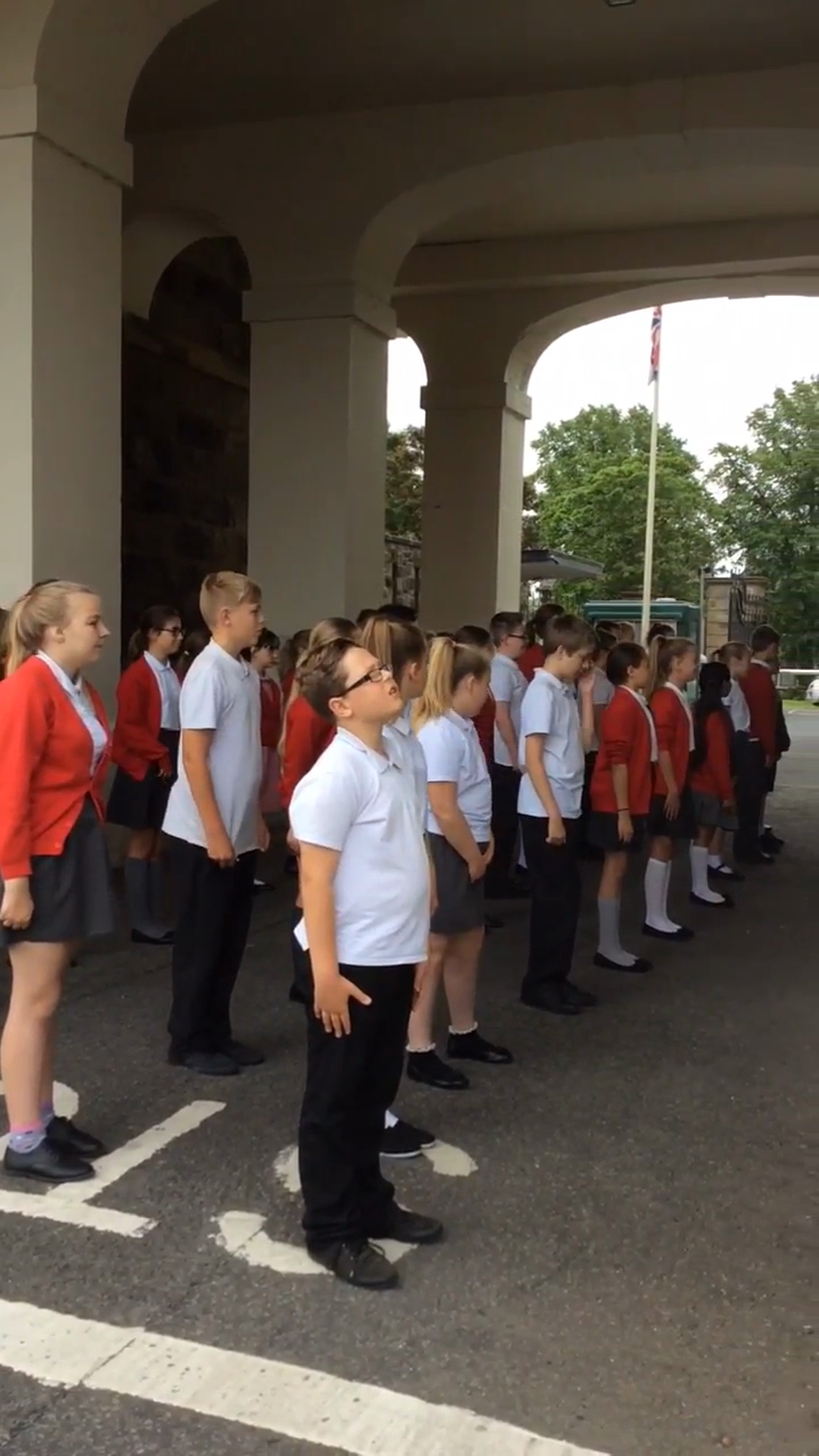 As part of our project about the Chorley 'Terriers', James Nevett, an ex-pupil, took time out from his high school to give us more detail about the Battle of Festubert. Thank you James! You have so much knowledge and passion about history.

UKS2 are working towards an exciting history project to be displayed at Astley Hall, investigating soldiers from Chorley Pals who died in the First World War. Volunteers from Chorley Family History came into school to help us research the soldiers on the 1911 census and through their military records available on line.

We will carry on our research as many lived in the same streets as us. Many were textile mill workers and we would like to understand more about their lives in chorley at this time.

We will be making small teddy bears to remember the Farnell teddy bears which were given to soldiers as a keepsake to remind the men of their loved ones at home. There are moving stories of teddy bears being returned to families but without their owners.

Researching Private James Baxendale
Researching Corporal Alfred Blackledge
Researching Private David Gent
UKS2 have explored the Neolithic village of Skara Brae on Orkney. We are writing non-chronological reports about this amazing site uncovered by a ferocious storm in 1850. Imagine living in a place like this!
What teamwork!
We used slate chippings to build
We worked in 2's and 3's
Look at our finished Neolithic buildings.
SKARA BRAE POWERPOINTS BY YEAR 6
Top
Cookie information
Cookie Notice