The BEST of the BEST!

Following our work on 'The Highwayman', Class 10 have concluded the project with a sensational newspaper report of the tragic events which unfolded. Read all about it from Millie and Mason.
Mason
Millie

Congratulations to James White - he won the 'What's Your Story' writing competition organised by Chorley Council.

EASTER THROUGH THE EYES OF ST. PETER

Class 10 have studied the letters of Peter in the New Testament and written letters to the people of Chorley to encourage them to have faith and believe in Jesus just like Peter wrote to the Colossians and the Philippians.

Our writing has captured the events of the Easter story as well as a rallying cry to everyone that Jesus is the way.

Our writing is amazing!

A letter from Peter to the Chorleians by Grace

Jesus said to me “It is time to be prepared to be courageous.” He is here.

I was there, I saw exactly what happened. Believe. He was a wonderful Jewish king, he changed the world. He saved our sins. Everyone was saved. He wasn’t a show of. A show of isn’t someone who comes to Jerusalem on a colt and who’s always humble. Don’t be doubting Thomas. Believe before you see it.

Do you really think it would hurt the world to build another church for our king? He came from the dessert in rags not silk. He sacrificed his life on the cross just for our sins.  Be courageous, he will rise evermore.

I’m filled with guilt, shame and atrociousness. If I stayed awake I could have stopped them-but that was still the wrong thing to do. Unfortunately, it was time for Jesus’ surrender and a cross to be hung up high. I denied knowing Jesus 3 times.

Heartbroken, he was hung up high above me. Melancholy, put in shade by thy lord for killing his one and only son. He died for our sins.

Troubled, Mary went back to check the Lord’s body was still there, but shivered in horror. Unexpectedly, coming out, there was no hope of finding him. “My Christ is missing, oh where could he be.” Crying, she lowered herself down onto a stone next to his tomb. Without warning, someone came over to her “What’s wrong,”

“My saviour’s missing,” she gasped. “Lord, your, your alive.”

“Go, go tell Peter and all of your Christian friends that I’m alive.” I got told but couldn’t believe it, He was alive. I went and mentioned more about the risen Lord. Everyone went to check. It was true.

Brother in faith, I wrote this letter to tell you this wasn’t a lie, it’s the truth. The Lord has risen and hopefully it will always be the same. Make churches. Tell the truth.                  Believe.

A letter from Peter to the Chorleians by Millie

It is time for you to believe, Jesus said to me. I believe, I thought to myself, we are the chosen one’s we are going to spread the word and be a true Christian. I was there when we entered Jerusalem. Everyone “HOSANNA! LET IT BE THE KING!” He came humbly through on a donkey… the saviour has arrived. He is going to change our lives for the better. Beloved brothers and sisters you can trust me. All the people were waving palm leaves… I had a forbidding feeling something was going to happen.

The suffer of the Lord’s plan is to soon, I can’t bear to watch. Jesus was praying on top of the hill, when Judas was taking the soldiers up to him. I am guilty, I fell asleep while Jesus was praying. When Jesus came back out of the garden Judas came up to Jesus and gave him a kiss. The soldiers came running through to arrest Jesus. I took my knife and cut one of the soldiers ears off. Jesus said “No vilance, it’s not the way, I could send angels if I wanted to.” Jesus held out his hands and heeled the soldiers ear, he was amazing. The soldiers tied Jesus up.

What is going to happen now?

I denied it, I DENIED IT- NO! Why did it have to happen? I am so guilty. I saw him walk through the city holding the cross and a fake crown made of real thorns. I saw blood dripping down his face. He made it up the hill, fell down, got stripped. They got a hammer they got thorns and hammered the thorns in. After that, the sky went black and the wind started to blow. His last words were “Father I give you my life.” He bowed his head and died. Water streamed down my face. I couldn’t believe this had happened…

The tomb was empty. He was gone. I thought someone had taken him. I turned around and right before my eyes, our lord stood. He said “Go, go and tell everyone that the lord is back.” I ran back and told the disciples. Everyone believed but Thomas. Just then 2 men came in and said “We have just seen the lord.” Our hearts were amazed; I couldn’t believe it. He told us the story. They were on the way to Emmaus and a stranger asked if he could join him. They went they went to the house and took the man with him. The 2 men asked the man if he could do the blessing. He did. The man took the bread and broke it- just then they knew Jesus had arrived. After that Thomas said “that is stupid will not believe until I put my finger through the wounds.” Jesus was right behind him and said “Go on then Thomas put your fingers through my wounds and stop doubting.” He was shocked “ My lord,” he shockingly answered.

OUR SAVIOUR HAS RETURNED!

Go in peace and serve the Lord.

I am telling the truth, you must believe me. Our lord is with us I promise.

I wrote this to you because I want you to realize our lord will never leave us and never stop loving us.

Go and serve the lord!

A Letter from Peter to the Chorleians

Keep calm, God is on our side, not theirs. We are cleaned by the blood of Jesus Christ.  We are suffering together. Be patient, for God is waiting for the right moment to free us.

Jesus told me that it was time … Time for what?  I would soon find out. We embarked on our annual journey to Jerusalem.  Upon arriving, people greeted us with palms and were celebrating, “Hosanna!” they cheered. As they saw the King on a donkey, I felt like nothing could go wrong. Please, my friends don’t be like doubting Thomas and join me in Christianity.

Soon all went wrong…  Jesus called me to the Garden of Gethsemane and prayed quietly.

Unfortunately, I fell asleep, I am so ashamed.  Still feeling guilt-ridden, Judas came to Jesus and kissed him delicately on his cheek.  In that moment, Roman soldiers came and trapped him.

Furiously erupting with rage, I chopped one of the Roman’s ears off, (I thought I was helping him).  Jesus calmly spoke in a quiet voice, “Violence is not the way…”

Heartbroken. Guilty. Solemn. We watched Jesus suffer; they insulted him, they gave him an excruciating crown of the thorns and forced it onto his head.  They even rolled a dice for his clothes.

All hope was lost, Jesus’ limp, lifeless body fell down and a fierce wind blew. The Romans where proven wrong…

My heart sank when I saw my Lord’s body placed into the tomb and a large stone was rolled over the entrance.

That is not the end my friends, Mary was up all night crying and when the sun rose she was the first one up and ran to the tomb. The stone was rolled away…  Mary found herself faint but then she found the strength to call over a Gardener.

“Mary”, a voice whispered gently from nearby. She realised who it was – Jesus!  She hurried back to the town to tell me the good news.

I cannot understand how or why, but I feel as though my strength is back. Believers carry on believing, doubters start to believe.

I wrote this letter to show you that all of this is part of the plan from God. Stand strong as you shall be welcomed with open arms at our church.

Go to serve the lord as HE IS RISEN!

The Piano by Class 10

Here are our final published pieces for our work on 'The Piano'. Hopefully, we have captured for our readers, the wonderful atmospheric memories of an elderly man, transported to the past by his beautiful piano music. 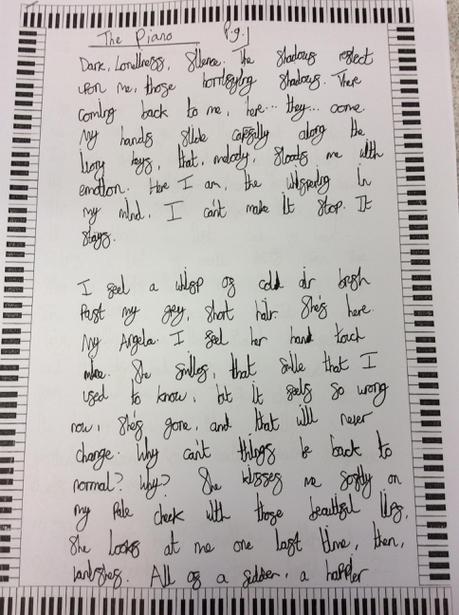 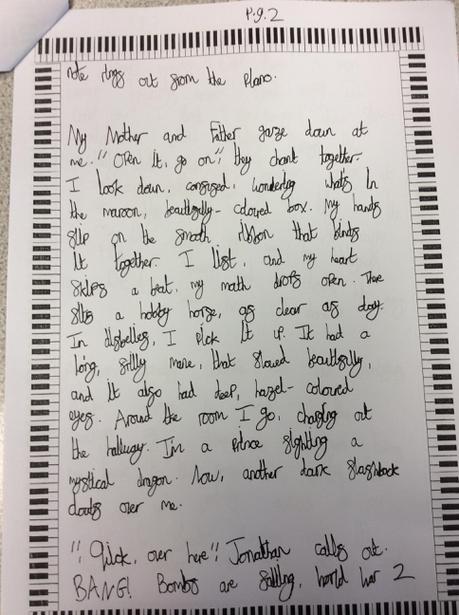 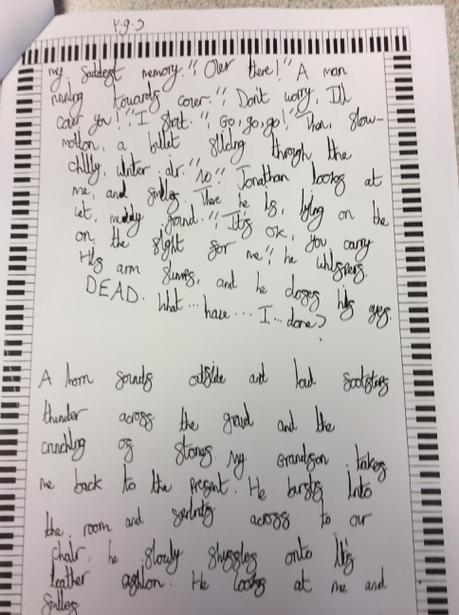 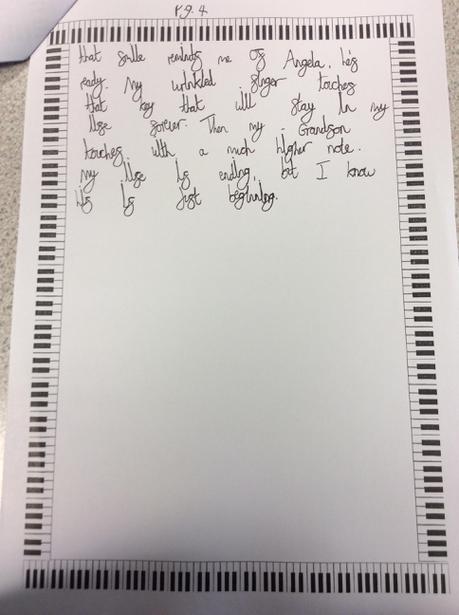 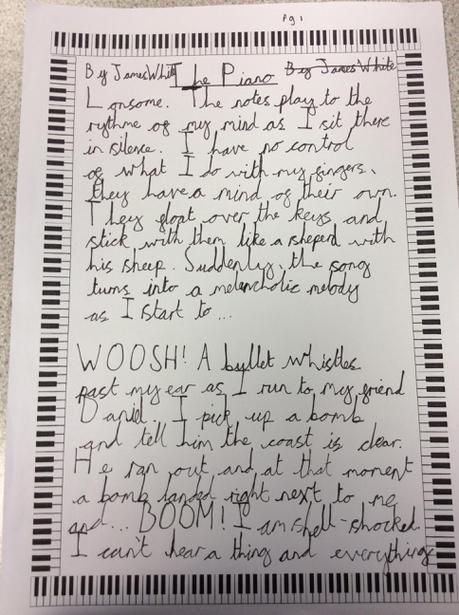 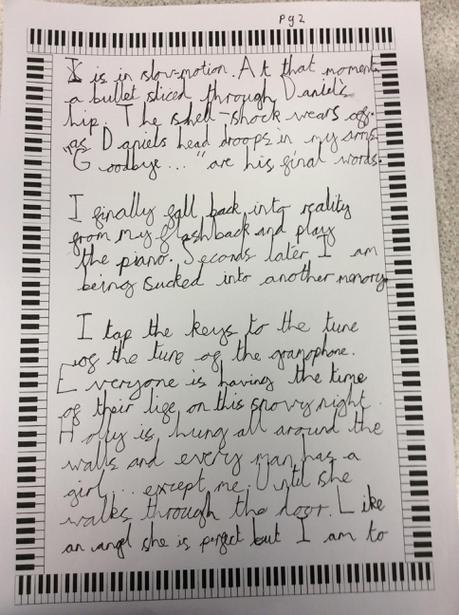 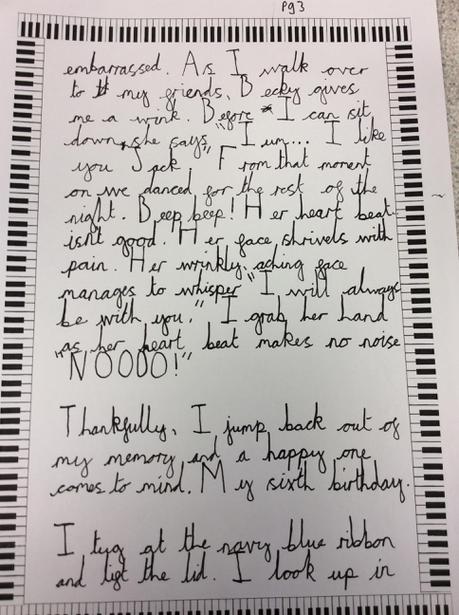 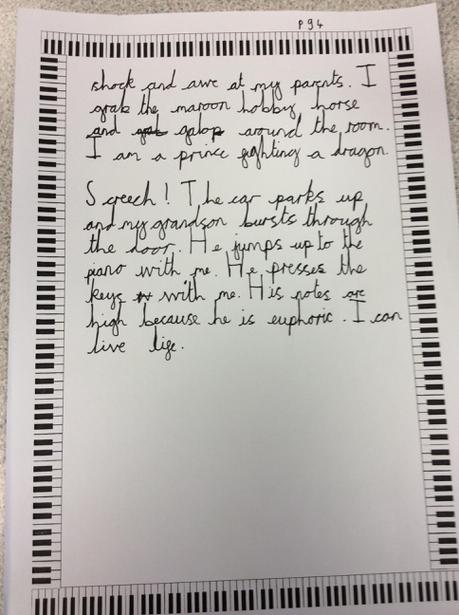 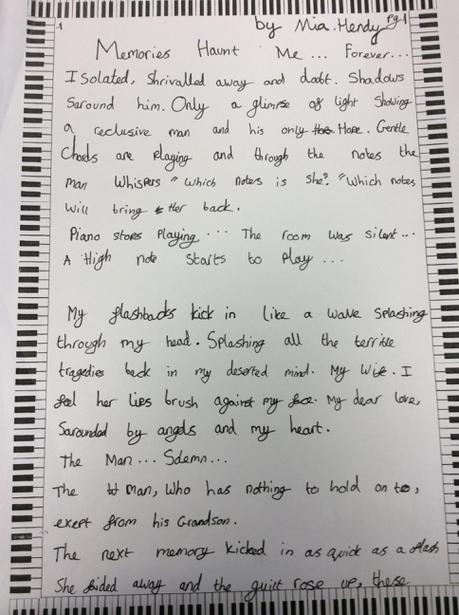 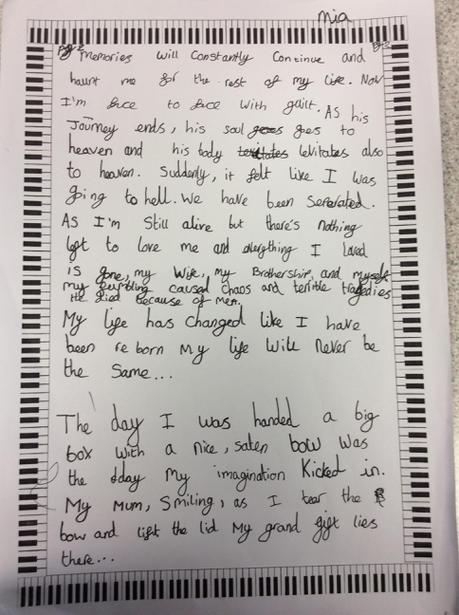 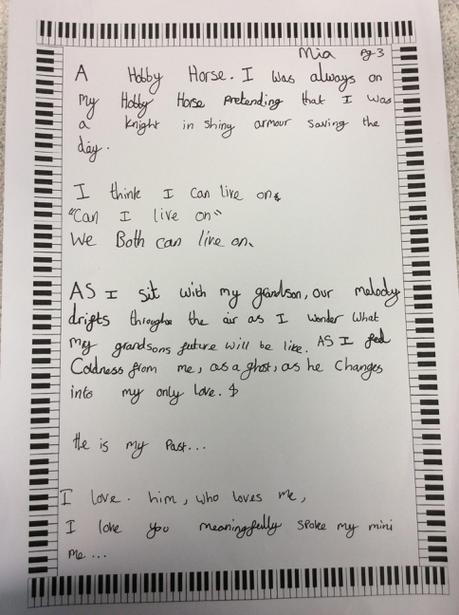 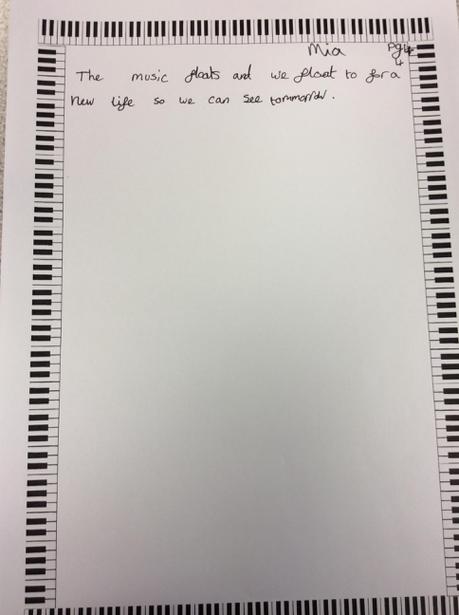 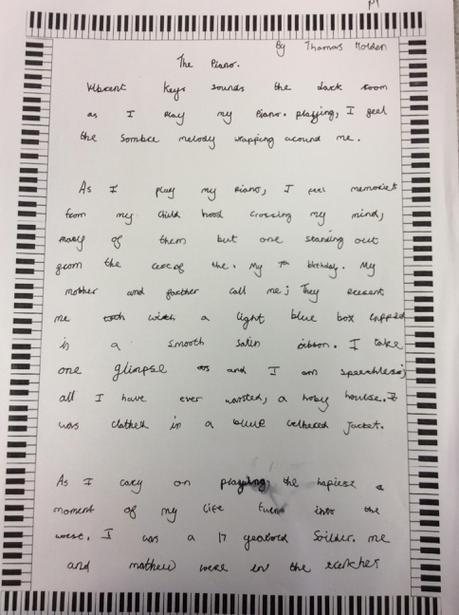 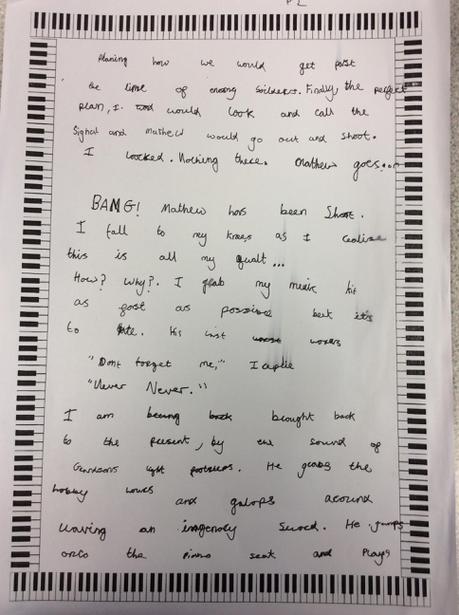 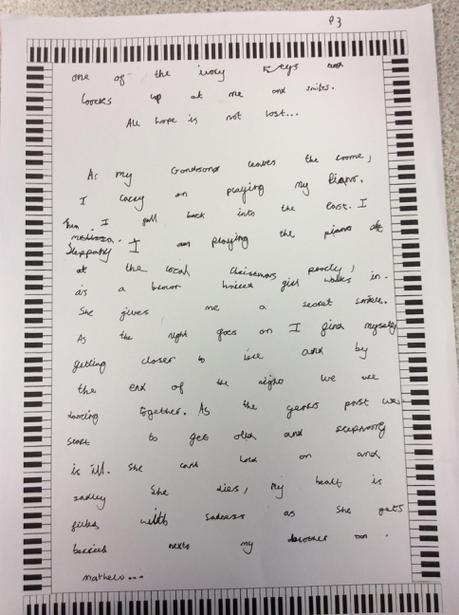 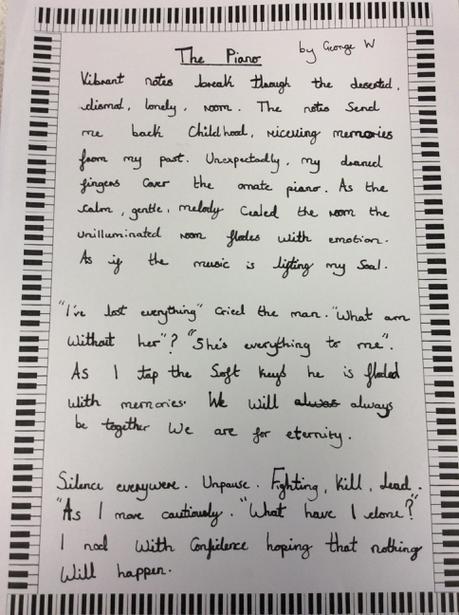 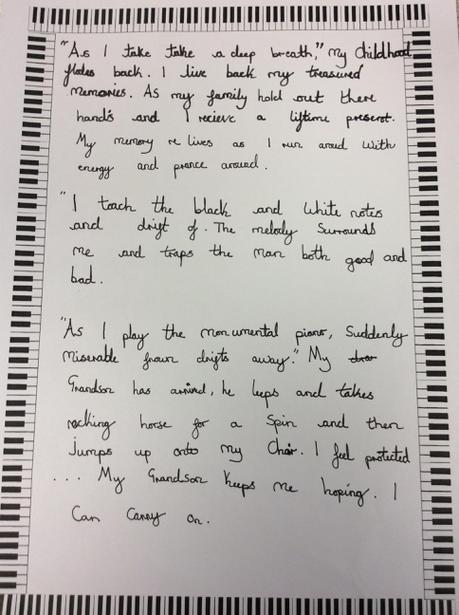 Class 11 have been writing a flashback based on ‘The Piano’! Tom has made such amazing progress in his writing this term! We loved reading this!

Tom
Tom
Joe in Class 10 wrote a powerful piece of writing in role as the character Mr Evans from our class text 'King of the Sky'.......
Finlay in class 4 has written an excellent description of the features you will find in a mosque! 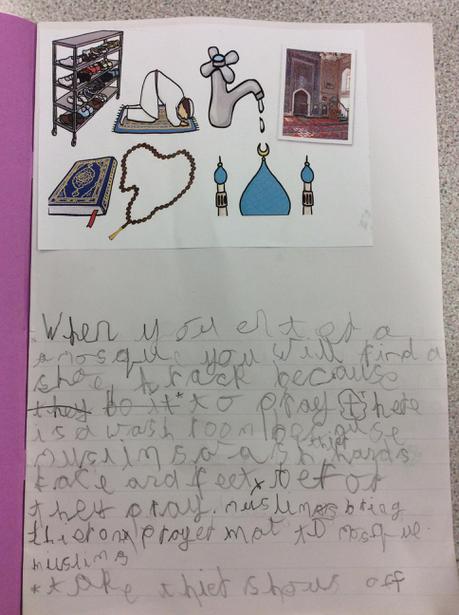 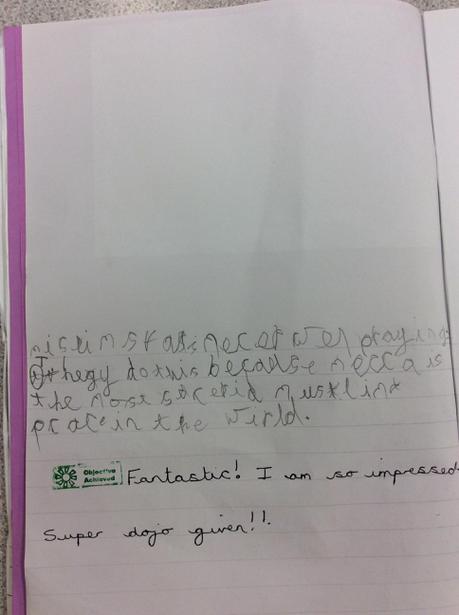 Class 3 - Jack and the Beanstalk

YEAR 3 THESEUS AND THE MINOTAUR

An amazing piece of writing to completely encapsulate our Friendship Week.

Finley from Class 6 (Year 2) has produced some superb writing showing fantastic progress.
Class 11 have used images from Shaun Tan's book 'The Arrival' to transport themselves into the lives of an immigrant. We discussed why people move away from a country and what emotions that must create. We learnt about the Irish Famine and potato blight and discussed the similarities and differences with immigration today. This writing tried to capture an individual's story - it's amazing!
Ammaarah
Seth
Michael
Sadiyah
Sadiyah page 2
Millie
Millie page 2
Joshua
Keeley
Oscar
Olivia Stanley
Olivia page 2
Jade's story for Handa's Surprise
Jade put herself in the story
Rowan McSweeny's amazing writing about Handa's Suprise!
Top
Cookie information
Cookie Notice